Founding Member of the Chartered College of Teaching

The overriding theme in the design and engineering of the A2 was summarized by the then Audi UK product manager in an interview after the car won a design award in 2001 as “create a small Audi, not a cheap Audi”, and the creative brief is said to have been “Transport four people from Stuttgart to Milan on a single tank of petrol”.

The A2 is built with a considerable amount of aluminium and aluminium alloy, making it weigh significantly less than cars of similar size. Its reduced weight helps it to use much less fuel than vehicles using traditional steel monocoques. Under certain circumstances, consumption for the 1.2 TDI model can be as low as just over 2 litres per 100 kilometres (140 mpg-imp; 120 mpg-US). This version of the Audi A2 won the “Nordic Eco Run” fuel economy race in 2003, with a consumption of 2.62 L/100 km (107.8 mpg-imp; 89.8 mpg-US). Even the normal versions with petrol engines are capable of 5 L/100 km (56.5 mpg-imp; 47.0 mpg-US). The A2 was also notable for being the first Audi model since the 1970s Audi 50 (type 86) and Audi 100 (type 43) not to be offered with its ‘trademark’ quattro four-wheel drive option. The A2 has a coefficient of drag of between 0.25 and 0.29, depending on the specific version.

The A2 still uses a contemporary unibody construction, with significant elements of space frame principles, and it is tagged by Audi as an ‘Audi Space Frame’ design. The outer panels of the body have little or no structural function – similarities exist with the original Renault Espace – and the space frame bears the forces working on the car. The frame uses casts and extrusions which are laser welded together to make the space frame. Improvements in shell stability, durability and stiffness, lower weight, and more interior space are results of its construction. “The A2, on the other hand, was designed as an aluminum car and the spaceframe has been optimized by parts consolidation, using large, cost-effective castings instead of aluminum stampings”. 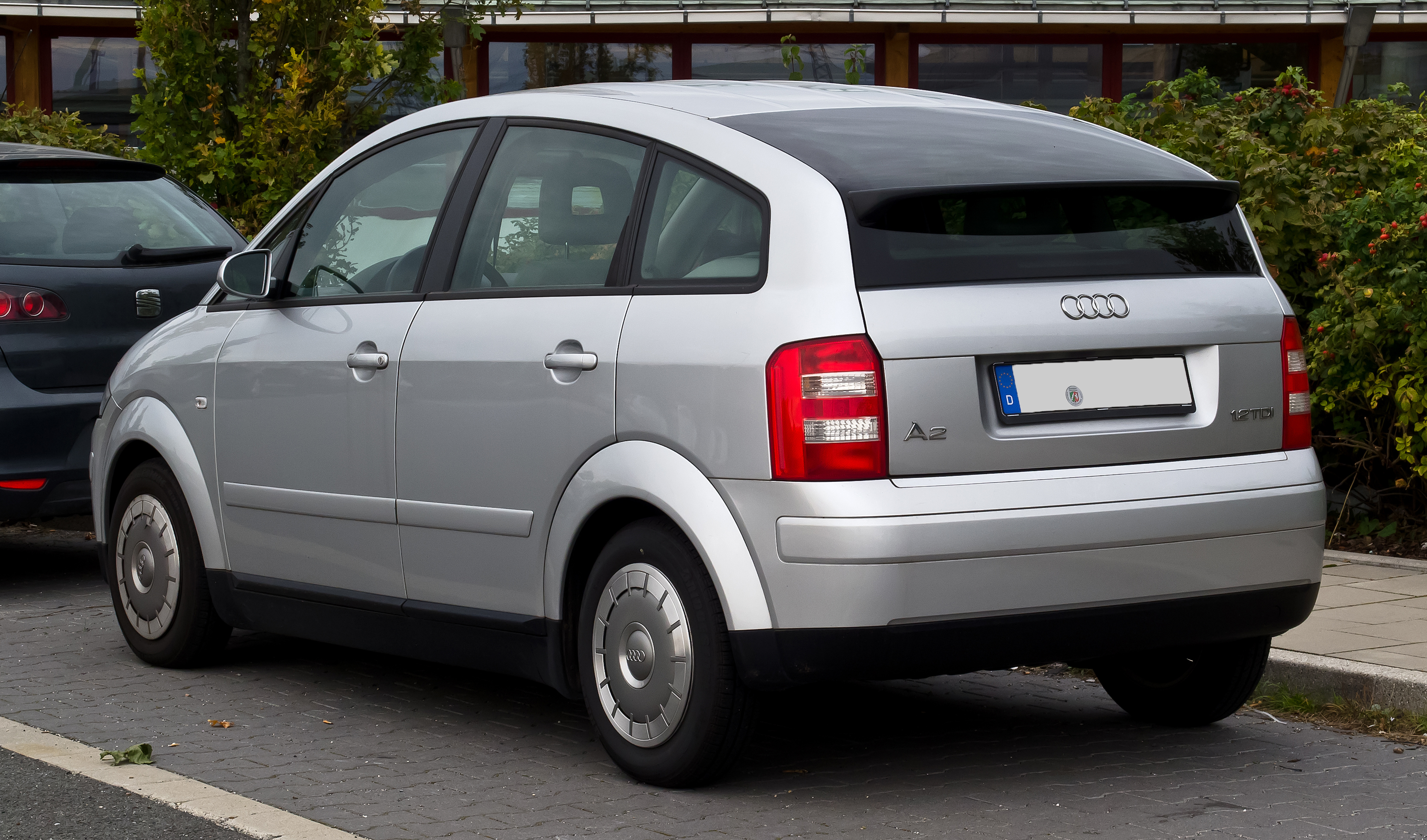 Unfortunately, the cost of working with aluminium, particularly with small production runs, meant that the A2 was more expensive than other cars in its sector, competing with the A-class and losing. Much of the high production cost was due to so many parts not being “off the shelf” and being specifically optimized for the A2. From Autobild in 2003: “The A2 is not one of the models with the highest return on investment”. The same article quotes the sales figures for 2002 as being 20,000 in Germany against 80,000 for the A-Class and “…lots of money for a car that is only 3.8m long.”

Audi was the first manufacturer to try to incorporate lightweight building concepts using aluminium and associated alloys into a “mass market” vehicle. Previous efforts at using the Audi Space Frame were limited to the rather more expensive Audi A8. As a guide to the mass involved, the entire shell weighs so little that two people can easily pick it up, and the side panel over the doors including the A- and D-pillars weighs approximately 2 kilograms (4 lb). A 2002 model A2 with standard equipment has a mass of 895 kg (1,973 lb).

The A2 can thus be considered a trailblazer for various newer aluminium-based vehicles, such as the second generation Audi A8, the Audi TT, and Jaguar’s recent X350 Jaguar XJ and 2006 Jaguar XK.

Parts of the A2 which are still made of steel include the bulkhead behind the front bumper (the “slam panel”), the wiper arm, standard A2 suspension components (the 3l ones are frequently of aluminium alloy), the rear brake drums and the exhaust system.